I started a preferment the day before yesterday with my Desem starter, but had to go into town yesterday so I wasn’t able to mix it up and bake. Instead, I took out my preferment and did a build on it adding half again the amount of dough I had. Then I put it into the cold pantry overnight. In the morning it was very light and airy. So I put it in the mixer and doubled the weight of the preferment making about four lbs of dough. The dough was light and spongy after four hours, and had risen higher than any of my other Desem doughs so far. So I shaped it and put it in the couche: 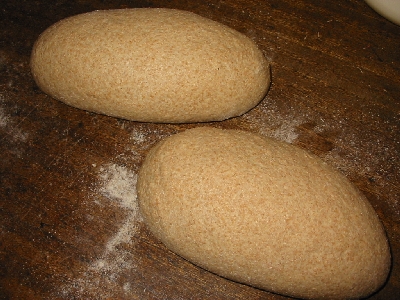 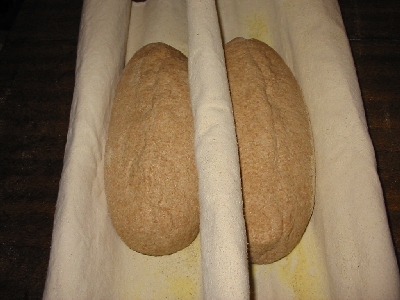 Boy did we have a full kitchen today. It was hard to fit in the bread baking schedule. My daughter made cream puffs and potato croissants (boyfriend coming over). I had to put my Desem loaves on the top of the stove to get some warmth and I put a wet cloth over the loaves. One of the loaves actually had the top crust(which was turned upside down) heat up, dry out and stick to the cloche, which never happened before. I had to spray it with water to get it off and then I noticed the outside layer, which was touching the stovetop through the couche, was actually a bit cooked! I decided to slice down through the middle to try to save the loaf. It actually  came out pretty nice:

The lighter color on the top of the crust is where the dough dried and cooked.

The next loaf was also dried out on the top crust from the heat of sitting on top of the stove and stuck to the couche. I was able to peel off the couche and get the loaf onto the stone. I also made one long lengthwise slice on the top of the loaf to try to save the loaf. I don’t think any other slices would have worked as the whole top crust was dried out and somewhat cooked. I didn’t  realize it was that hot on top of the stove when I set the loaves on a grate on top of the couche on the stovetop. But we had been using the stove for hours and it was just hotter than I realized. It also came out nice anyway: 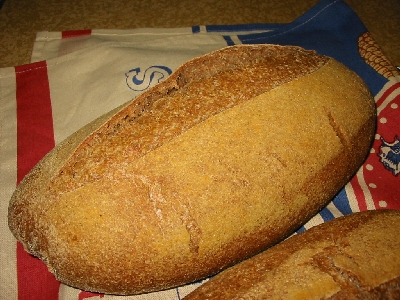 Here are the two finished: 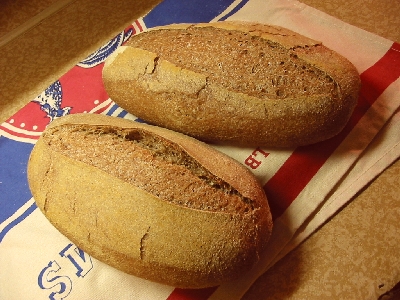 I don’t have any crumb pictures yet, but will tomorrow. They are still too hot to slice!

I am so glad I tried Desem bread. I never knew Whole Wheat bread could taste so good! It is moist, chewy, with a hard to describe full fermented wheat flavor of toasted wheat and maltiness. There is no added malt, but you sure taste it, especially when you toast the bread. My children that don’t usually like Whole Wheat bread (most of them) love the Desem bread. It never fails to be tasty and wonderfully sour!

Here are the pictures of the crumb: 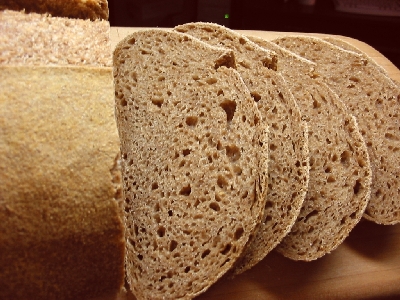 Playing Around with Teff Flour for Teff Bread

Baking in the Basement Woodstove!