I am working with the now very nice bubbly, sour, San Francisco Starter: 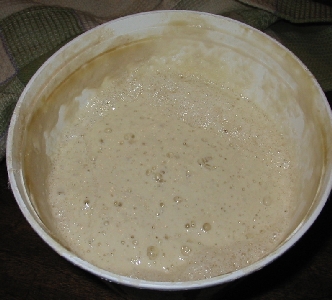 I am making the Two Night Super Sour recipe which is part of the Special Recipes collection on my web site. This is a nice recipe which builds up the dough in stages to have a long fermentation, oomph, and super sour flavor.

It was several months since I made up this recipe and the Washington coast where I live, has gotten very dry, as we have had very little rain for a while. I believe my flour is much drier than when I last made up the recipe and it has affected hydration of the dough. In the first two stages the dough is like a batter which gets thicker at each stage, but by stage two when you were supposed to stir in more flour with a wooden spoon, I could not use a spoon but had to just about knead the flour into the sponge batter.

This is the dough after being in the mixer for the final stage of adding ingredients:

I just wanted to bring this up to show a possible problem with following a recipe literally and not by feel also. I knew the dough was already too thick for what the recipe expected, however, I wanted to follow the recipe to the letter to experiment with the flour being possibly drier and affecting the hydration of the dough. I will state however, that the dough is a lower (drier) dough than what is expected, but it is still within range of being a great dough. What I mean is that it wasn’t so dense and dry with dry lumps that I needed to give in and add extra water. In some lower hydration doughs, I expect that would happen and you just could not follow the recipe but would have to add extra water or you would have dense, bricks for loaves. This is where experience and common sense kick in and you just decide to wing it. With sourdough there is that factor of winging it that will make you a better baker. You cannot always go by the letter of the recipe for sourdoughs. Many times you go by feel. When a recipe comes out wrong the first time you do it and you know everyone else is able to bake up a good loaf using the same recipe, evalutate what you need to change to get the loaves they are getting. It may be warmer in your kitchen, your starter might not be as vigorous one time as another, you may have bought a new brand of flour. If its raining out, it will be more humid and that will affect the rise time. So one thing I would recommend is to keep a journal of your bread baking. I do. I have a tablet that I write down everything I find interesting or helpful. I write down proofing times, weights of common ingredients, changes to a recipe, etc. I can’t tell you how often it has helped me figure out what I needed to change to optimize a certain recipe or what I may have done wrong when a batch flopped.

Here is the dough after the bulk fermentation, ready to be shaped into loaves:

Here are the three loaves which weighed approximately 1lb 11 oz each: 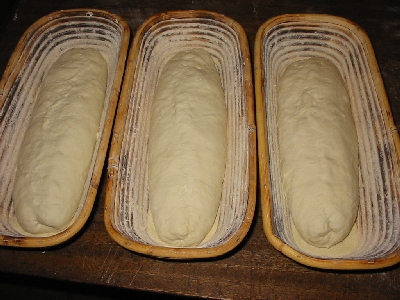 In the morning the loaves were already well risen in the refrigerator. After I had the first loaf out and warming up for half an hour, I turned on the oven to preheat.

Well despite the problems I was having with the hydration being off, some of the nicest looking loaves I’ve ever baked, came out of my oven this morning. The loaves feel light and airy, they have a crackly crisp crust, and the grigne (slashes) came out really nice! These would be considered San Francisco Sourdough Loaves made with the San Francisco starter. I have this recipe included with the starter when the starter is purchased, it is also available in the Special Recipes collection.

Here are the loaves: 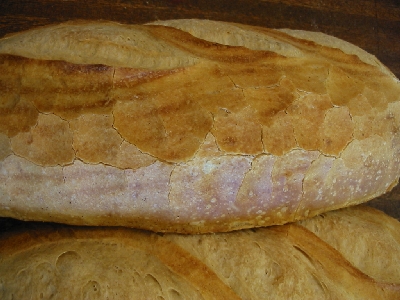 Delicious bread, and looks wonderful too!