I have two Alaskan starters, one is the one I sell and it is a very fast starter taking only about 3 – 3.5 hours to double. The second one is 106 years old and is a different story. I will tell you about it. I wasn’t having the same success with the 106 year old starter as with the first starter so I decided to do an experiment to see why. I made up a batter with 4 oz flour, 4 oz water and 3 oz starter(the starer was at 166% hydration). That came to approximately 114% hydration for the batter(which is a way of saying how thick the batter is). I carefully measured out both starter batters into quart jars and labeled their starting time with a line and their name. Here are the starters at the beginning of the experiment: 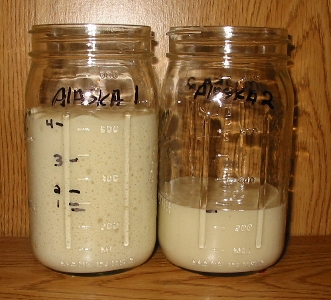 Alaska # 1 doubled by 3.5 hours and went to 4.5 hours before it finally collapsed back to the third hour mark.

As you have already noticed by now, Alaska starter # 2 did not budge at all ! Shocking! I decided to see if what it liked was a lower hydration. I added approx 2 Tablespoons of flour to the existing batter which was at 114% hydration. That brought it to approx. 109% hydration. What happened is truly amazing. After eight hours it finally looked like this:

Unbelievably, this morning it was still going strong at 18 hours later:

It has even grown another 1/4 inch up the jar since I took the picture an hour ago. Which means it is now growing faster. This raises some interesting observations.

It may have seemed as if  Alaska # 2 was a dead starter, but I knew it wasn’t. Doing an experiment like this can let you know what is going on and the potential of the starter. When I tried to make waffle batter with this starter it made a heavier waffle, now I know why. Some of the things I CAN do with this starter is to make biscuits the night before and have them nicely risen the next morning, and I am going to try that! You can have a long fermented bread dough and it should last a very long time. As a matter of fact , if you tried to follow a regular timed recipe with this starter , it wouldn’t do very well. This starter obviously likes a lower hydration dough and not a batter.

Another point I would like to make is that I have had these two starters for some time and they are without a doubt two different starters. They did not become the same starter by feeding with the same flour, as some people believe. That is a fallacy that some people who have not actually experimented with starters believe. I have many different starters and even over a long period of time, as long as I have not cross contaminated them by using the same mixing spoon,etc, they still have their own unique characteristics. I think that there can be organisms in the flour already that can help you get a starter going, however, a batter that is actually innoculated with a particular starter, should have the introduced starter take over and keep out any competition. That would be because the amount of the organisms in the innoculation starter would overwhelm any in the flour. A similar comparison would be a yogurt bacteria. If you innoculate a container of milk with a yogurt bacteria, you would then have that yogurt from then on, and not whatever organism that might have taken over which was already in the milk. If a starter is kept healthy by regular feeding and care, it should be strong enought to keep out any competition. It is when the container gets dirty, the starter is not fed, and the acidity of the starter is compromised that another organisim can take over. Also care is needed in culturing a new starter or rehydrating a new starer until the starter is strong and bubbly, another organism can take over. I know this is a controversial subject in the sourdough world, so any feedback or experience you have will be appreciated.

Thanks to Gary Taylor for help with hydration!