Boy did I ever mess up this last batch of bread! I was doublechecking a recipe and so I mixed up some Molasses Whole Wheat bread. I was mixing up the dough when I suddently got called away on an errand to visit someone who is ill. I wasn’t able to mix for the amount of time needed, so I put on the lid and left the dough. When I got back it was quite a bit later and the dough was well into the bulk fermentation so I decided just to leave it alone, wondering how it would do without the needed mixing. After bulk fermentation, it was evening and I poured out the dough to shape it. Much to my dismay, there was embedded chunks of unmixed flour and hardened dough where the flour had only partly mixed in. It looked like maybe 1.5 to 2 cups worth! I never had this happen before and I almost threw the whole thing away! Instead I pulled out all of the unmixed hardened stuff and kneaded the rest of the dough. It felt great and smelled great so I went ahead and shaped it and put in the bannetons. It made three loaves of almost 2 lbs each, so you can see it would have been a large batch. Then, because the dough seemed just a bit slow raising, I decided to leave the shaped loaves out half an hour before putting in the refrigerator. I got interested in a movie someone in the family was watching, forgot all about my dough and 3 hours later when I remembered it, the dough was already proofed and ready to bake! However at 10:00 pm with a cold oven, I was not ready to bake! So I took each loaf and reshaped the dough and put it out in the cold pantry which was at 45 degrees (it’s been cold around here!). 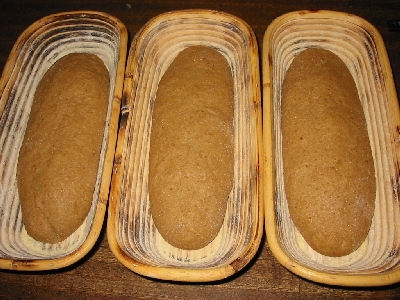 That was my next mistake! By morning the pantry had warmed up to 50 degrees and rising. The dough was already overproofed!

I tried to slash it, but after one slash it started to deflate immediately! Jeesh!! So,  without much hope of a third rise possible, I reshaped the loaves again!!

Now this would be the third time proofing or the fourth if you count the bulk fermentation! I began to think the dough wouldn’t raise, or the dough would have been so long fermented, it would be ghostly white ….again! However, luck was with me this time, or Whole Wheat and molasses provide plenty of sugars for the yeast to feed on, because…. much to my great surprise, the dough rose very well even though it did take three hours. Here is what I got after all of my mistakes…at every single stage!!

Here is an up close picture of the bread:

The crumb is light as a feather and fine grained, the oven spring  was spectacular ! The taste is very wheaty and has a wonderful tang. This turned out better than the original recipe!  Hurrah for mistakes…..sometimes!!! 🙂