I started a new recipe yesterday with motherdough added again. I just can’t help liking the extra color, smell, and flavor of the longer fermented motherdough. I went ahead and made up a Basic White Sourdough recipe and added motherdough and 1 Tablespoon of Malt syrup to the mix. Unfortunately, I believe I overproofed on the first proof slightly. I think if I would have knocked down the dough one hour sooner, I would have had an optimum dough. So it was a little bit sticky from being overproofed. I poured it out on a floured surface and kneaded it for a little while to try to correct the stickiness. It felt better when I was done and then I made it into four loaves. I made two larger loaves and two smaller loaves. The recipe also had the cracked wheat thrown in, as I like some texture. The overnight ferment in the refrigerator worked out great. It took about two hours for the morning proof.

Here is the second loaf, it was one of the smaller loaves at 1lb 11 oz: 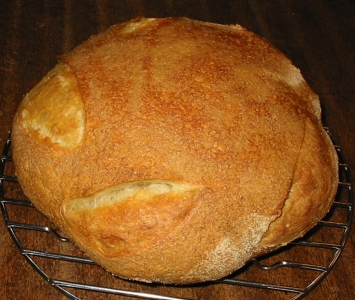 Here is the third loaf at two lbs: 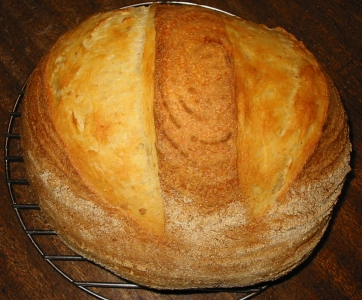 Here are all four loaves together:

I will post some interior pictures later after they cool.

Here are some pictures of the interior. I expected the crumb to be more fine with this lower hydration dough than I usually work with. I seem to still have gotten some large end holes that are usual with high hydration motherdough breads: 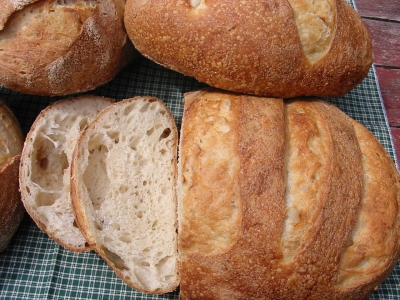