What would you do if you had a batch of sourdough ready for the oven, the oven is heated and ready to go, you pop in the first batch and suddenly….the power goes out? I was faced with that scenario yesterday. The night before I started a preferment using:

I mixed together the preferment, covered it and let it set at room temperature overnight.

Next morning I added:

I mixed this altogether in my mixer and let it autolyse (rest) for ten minutes. I then mixed it for 3 minutes. In only four hours it was already bulk fermented:

We had decided to have hamburgers for dinner and didn’t have any hamburger buns on hand. So I took 3.4 lbs of the dough and made it into sourdough hamburger buns (this was not my intention!) I made two pans worth of buns. Then I took the other approximately 2 lbs of dough and made it into a batard shaped loaf and put it into a banneton to proof. I proofed the buns for 2 hours and then popped the pans into a preheated oven (425 degrees). About a minute later, the power went out! Where we live power goes out fairly frequently. We have high wind storms and live right next to the Pacific Ocean and Willapa Bay on the Washington Coast. I knew someday the dough would be ready… and the power would go out! We had just had a power outage two nights ago when a drunk from the local bar met with a power pole…grrrr… luckily I wasn’t baking bread then.

Anyway, I told the guys to fire up the barbeque and thought we would try to finish off the buns on the barbeque. I left the buns in the oven which was still pretty hot until they got the barbque hot enough and then they were barbequed! They turned out okay, somewhat too crunchy for hamburger buns, but we survived. Now to figure out what to do with a 2 lb loaf ready to bake and no oven! I was going to try to wrap it in a layer of aluminum foil and barbeque it like in one of my other recipes, but the loaf was just too fat. I remembered that I had a small roasting pan for roasting just a chicken. I went and found it…in the dark with a flashlight… and turned over the dough into the pan. I was glad I had made the dough a lower hydration dough because when I turned it over and it plopped into the roaster, I thought it would deflate, but it did fine.

Well, we had the hamburgers done and off the grill, and I put the roaster with the loaf onto the barbeque, and shut the lid. About 20 minutes later, the power came back on 🙂

So I turned on the oven which still had heat from the stones, let it heat up for a bit and soon went out to get the roaster. The bread looked far from done, but it was doing okay! 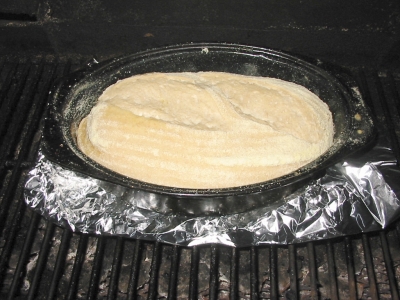 The dark spot on the top was from where the dough was touching the roaster lid. The dough  got some great oven (roaster?) rise and it made a nice lofty loaf. Here is the crumb:

I never got any pictures of the hamburger buns, as they were eaten up fast in the light of kerosene lamps.

So, what would you have done, if the power went out, right when your dough was proofed and ready to pop into the oven??