I love Mill Grain Bread. You can add any kind of grains or seeds you like. It smells and tastes so good! I know that many people if not most, keep their starters at 100% hydration. You might have noticed that the last several blog entries with recipes were also using the starter at 100% hydration.Continue reading

I decided to use some Millet grain that I had bought for experimenting with. I ground up a cup of Millet into a meal type consistancy, which I used in the dough and outside of the crust when making this bread. The texture of the crumb was really great, I had wondered if a whole cup of ground Millet would affect the crumb and how, but it turned out nice and the smell was terrific. The crust was crunchy, crispy and making toast out of this bread was a treat. For the first two loaves I brushed the crust with egg glaze and sprinkled the ground Millet on the outside. For the third loaf, I also brushed on the egg glaze but I sprinkled whole Millet seed on the outside. Here are some pictures of the loaves:

Here are the loaves proofing in their couche:

Here are the first two loaves:

Here is a closeup of the crust with the ground Millet on it: 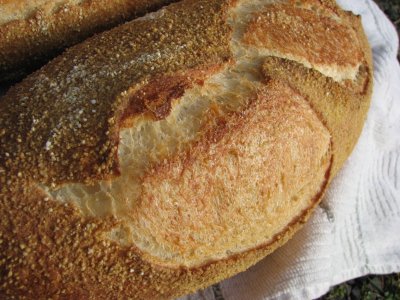 Here is the loaf with the whole Millet seed on the crust: 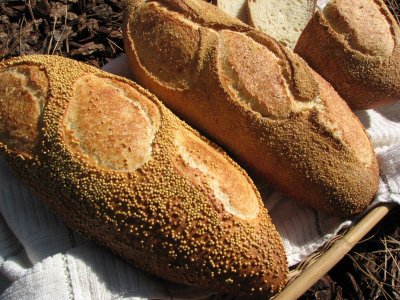 Millet is an interesting addition to sourdough bread. The grain baked on the outside of the crust was not crunchy hard like cracked wheat, but was softer and more biteable, yet still crunchy.

From the site  http://chetday.com/millet.html , I found the following information about Millet:

Millet is highly nutritious, non-glutinous and like buckwheat and quinoa, is not an acid forming food so is soothing and easy to digest. In fact, it is considered to be one of the least allergenic and most digestible grains available and it is a warming grain so will help to heat the body in cold or rainy seasons and climates.

Millet is tasty, with a mildly sweet, nut-like flavor and contains a myriad of beneficial nutrients. It is nearly 15% protein, contains high amounts of fiber, B-complex vitamins including niacin, thiamin, and riboflavin, the essential amino acid methionine, lecithin, and some vitamin E. It is particularly high in the minerals iron, magnesium, phosphorous, and potassium

MIllet seems to go really well with sourdough baking, so you might want to pick up some Millet next time you are in town, and try it out.