I whipped up a batch of Two Night Super Sour Bread using Northwest Sourdough starter. I did a preferment the first night . This is how it looked next morning:

I then built the dough in stages the next day adding more to the dough and letting it ferment until I was finished at the end of the day (You will be folding and strengthening the dough with each addition). I then poured out the dough and gathered it into a ball:

I divided it into three:

I shaped the dough into boules and placed them in colander baskets which were lined with proofing cloths and a rush basket:

Into the refrigerator they went for their second night. Then next morning I decided to do something a little different. I heated the oven very hot to 500 degrees and put two of the proofed dough balls onto the baking stone. One I covered with my cast iron pot, which was also preheated in the oven:

I baked the two loaves at 500 degrees for five minutes and then turned the oven down to 425 degrees. I also sprayed the uncovered loaf several times during the first five minutes. After 15 minutes, I uncovered the first loaf, taking off the pot.This is how the loaves looked with another fifteen minutes left to bake: 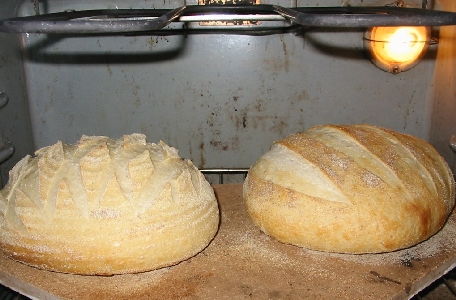 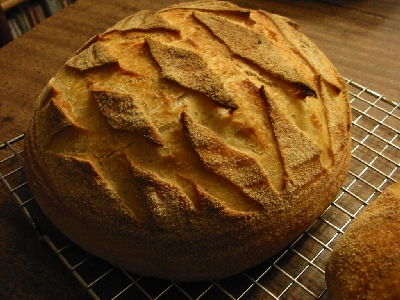 Here is loaf number three, I baked this loaf under a pot too:

Here are all three loaves:

Here is a pic of the crumb:

The bread is delicious and tangy, but not as tangy as usual for this recipe. I am wondering if a proofing box during bulk fermentation would help get a more consistant sour in the sourdough. I have had this same recipe turn out very sour, but it is colder in my pantry where I put the preferment and also cooler in my house than during the earlier months. I have noticed when we are doing alot of baking and the kitchen is very warm, that my loaves turn out more sour. I also feel that if it is too warm during the second proofing, you cannot have it proof as long as you would like. So I am wondering if a warmer bulk fermentation, and a cooler second proofing, would give a more consistant sour. Any ideas?